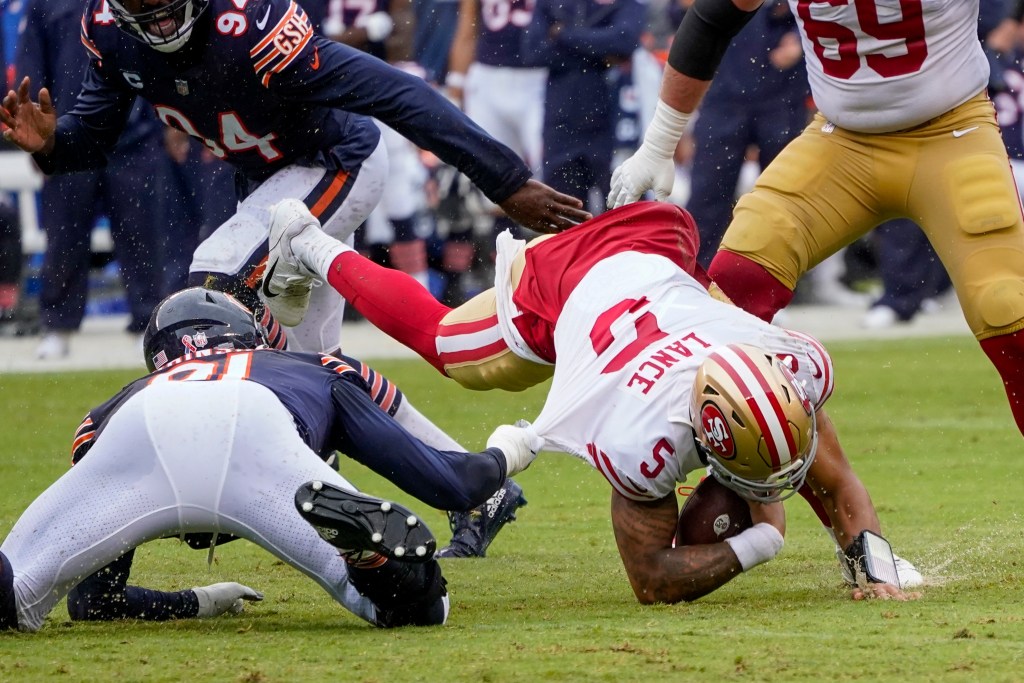 CHICAGO — No, Trey Lance could not pull off a fourth-quarter comeback win, a feat Jimmy Garoppolo produced in the 49ers’ previous two visits to Soldier Field.

Yes, Lance hurt their cause with a fourth-quarter interception, and he managed only as many completions (13) as runs (13).

As the final minutes ticked away, a downpour ensued, and once Lance was done flinging wild passes and splashing in the puddles, the 49ers’ hopes had evaporated and fans headed home in their multi-colored ponchos.

The Bears celebrated with belly slides into the end zone, reminiscent of the 49ers’ rain-soaked win at Washington in 2019.

There would be no joy in the 49ers’ locker room like in their past two visits. There would be an ugly loss, the fourth to start a season in coach Kyle Shanahan’s six seasons.

The 49ers’ defense went into a second-half freefall after a first-half shutout, and penalties across all phases crippled their hopes.

The play that seemed to seal the outcome: Lance attempted a third-down pass to Jauan Jennings on a slant route, only for it to get cut off and intercepted by Eddie Jackson at midfield with 9:42 remaining.

The Bears converted that turnover into their third touchdown in a 15-minute span.

Such offensive production figured to come from the 49ers, and they looked capable when Deebo Samuel scored their first — their only — touchdown on a 6-yard, second-quarter run.

But the offense did not have tight end George Kittle (inactive; groin) and it lost starting running back Elijah Mitchell to a knee injury, which he apparently sustained after blocking on Samuel’s touchdown run.

Fields rallied the Bears out of a first-half slumber by using both his legs and his arm. His scrambles gave the 49ers’ defense fits, and linebackers Dre Greenlaw and Azeez Al-Shaair drew penalties for hitting a sliding Fields.

Three snaps after Al-Shaair’s illegal hit on Fields (Al-Shaair was evaluated for a concussion from it), Eqanimeous St. Brown blazed past  Greenlaw for an 18-yard touchdown catch that put the Bears ahead 13-10. (Their point-after kick field.)

Deebo Samuel scored the 49ers’ first touchdown on a 6-yard run, further proof that he has no issues being used as a “wide back” and disputing an offseason narrative that claimed otherwise amid his contract talks.

Samuel, who had eight touchdown runs last season, got his first 10:11 before halftime. While he had a nice convoy of blockers (Mitchell, Ray-Ray McCloud, Mike McGlinchey), it was Samuel who finished clearing the best path as he plowed over Jackson at the goal line. Mitchell apparently became a casualty on the play, perhaps from a Bears linebacker rolling into his leg and injuring Mitchell’s knee while Mitchell watched Samuel score.

The next time the 49ers sniffed the goal line, Lance got sacked on third down and Robbie Gould came in to kick a 25-yard field goal for a 10-0 lead. Lance keyed the scoring drive with a 44-yard, third-down pass to Jauan Jennings.

The 49ers’ shutout bid was ruined by one of their former draft busts, Dante Pettis. He caught a 51-yard touchdown pass from Fields, who scrambled before finding Pettis all alone at the 30-yard line. That cut the 49ers’ lead to 10-7 with 5:32 left in the third quarter.

The plays that immediately preceded Pettis’ score: a third-down stop that was wiped out because of a Dre Greenlaw facemask penalty, a dropped interception by safety Tashaun Gipson and a stop for no gain by Talanoa Hufanga.

The Bears’ most notable feats in the first half: recovering a fumble on Samuel’s first carry of the season (at the 12-yard line on the 49ers’ first series) or drawing a penalty for bringing a towel onto the field and wiping down the field before a field-goal attempt (that instead led to a punt).

Penalty-wise, Dre Greenlaw drew a pair of questionable flags, one for landing on a sliding Fields out of bounds and one for grabbing a facemask on a would-be, third-down stop.