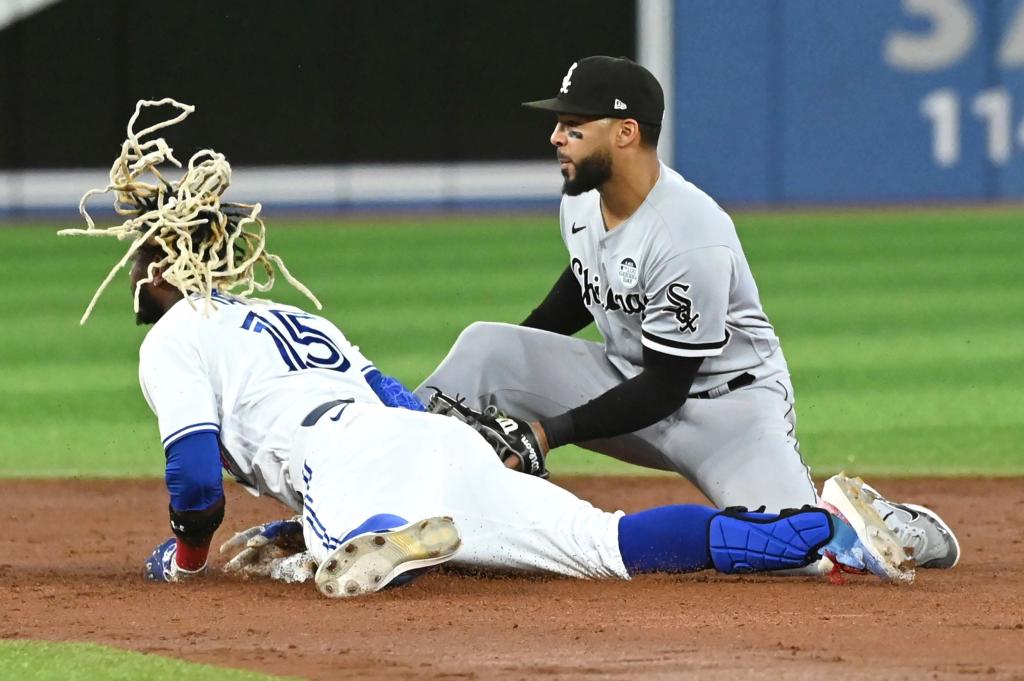 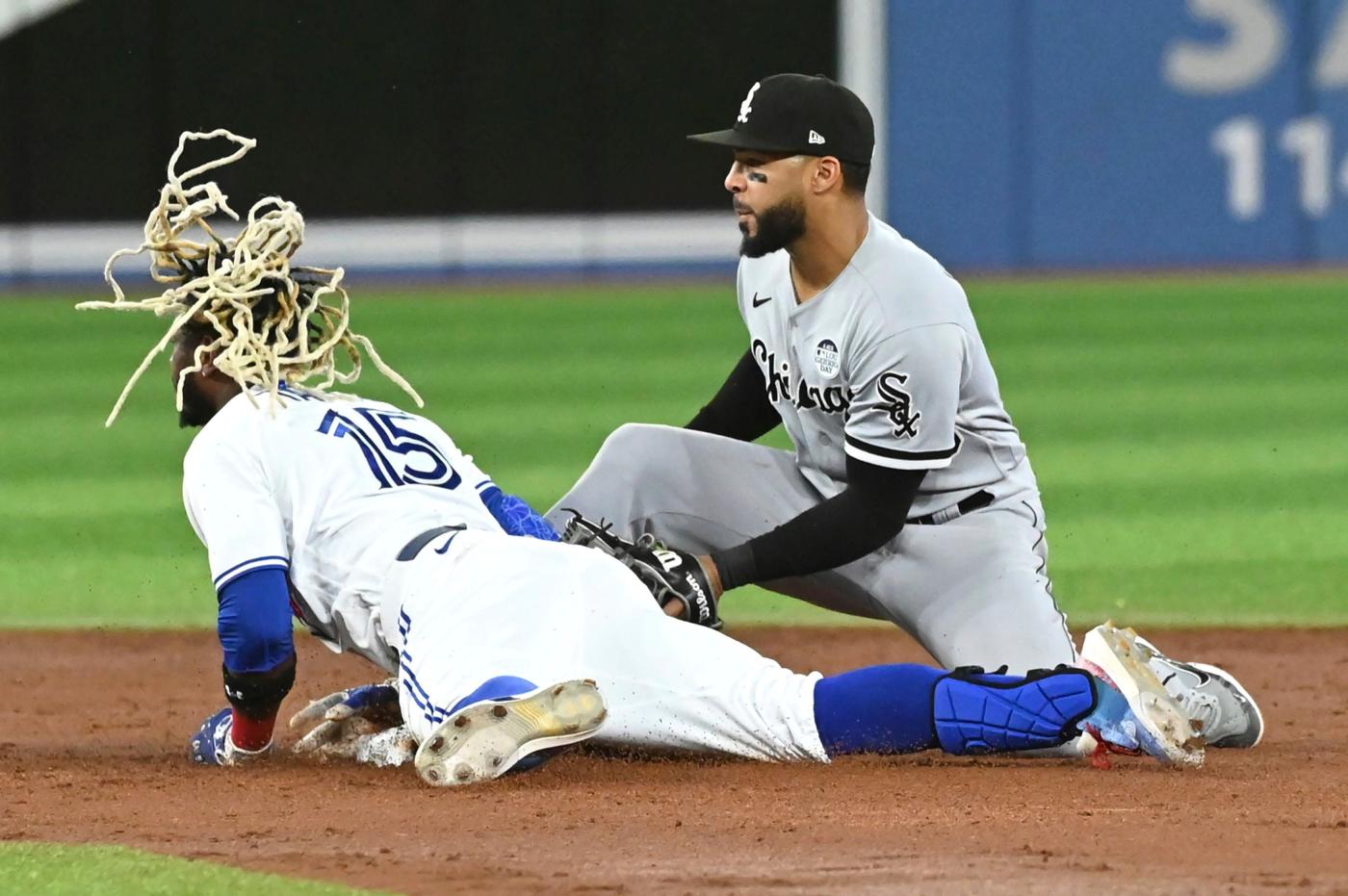 José Abreu led off the seventh inning with a single Thursday, extending his hitting streak to 11 games.

The right-hander was on cruise control for most of the afternoon at Rogers Centre. The Sox rallied with three runs in the eighth, only to give up four in the bottom of the inning in an 8-3 loss.

That completed a three-game sweep for the Blue Jays, who won their eighth straight game. The Sox, meanwhile, have lost six of eight to drop to 23-26 — and into third place in the American League Central.

Starter Johnny Cueto kept the Sox in the game, allowing three earned runs in six innings. He left with a 4-0 deficit.

The three-run eighth was a good sign, with Luis Robert hitting a two-run double against Manoah and Yoán Moncada picking up an RBI single against reliever Adam Cimber.

The momentum was short-lived, however, as the Blue Jays answered with the big bottom of the eighth.

Here are three takeaways from the sweep.

1. The Sox aren’t making the most of offensive opportunities.

It appeared the Sox were going to tie Tuesday’s series opener when Yasmani Grandal hit a fly ball to deep left with one out and runners on first and third in the sixth inning.

Reese McGuire tagged up from third and headed home. But before he scored, Danny Mendick was tagged out trying to advance from first to second after a tremendous throw by left fielder Lourdes Gurriel Jr. Because the out was recorded before McGuire touched home, the run didn’t count.

Sox manager Tony La Russa told reporters in Toronto after the 6-5 loss that Mendick apologized for the play.

“I said, ‘First of all, tagging up on that play is a good play, but you’ve got a throw right in front of you,’” La Russa said, according to The Associated Press. “If the throw goes there, you’ve just got to stop. He stops, the run scores.”

Those missed chances are magnified when the lineup is without someone as productive as Tim Anderson, who was placed on the injured list retroactive to Monday with a strained right groin.

While Tuesday’s baserunning was the most obvious example, it wasn’t the only case of the Sox not taking advantage of an opportunity.

Still trailing 6-5, Andrew Vaughn and Abreu singled to begin Tuesday’s ninth inning. Jake Burger grounded to third, and Matt Chapman stepped on the bag and threw to second for a double play. Gavin Sheets struck out to end the game.

Abreu hit a two-run home run in the fourth inning of Wednesday’s game, bringing the Sox within two runs.

Still down by two in the seventh, Abreu batted with the bases loaded and two outs. He grounded to short and the Blue Jays got the force at second. Vladimir Guerrero Jr. created some distance with a two-out, two-run homer in the eighth, helping the Blue Jays to a 7-3 victory.

The Sox entered Thursday just 3-for-32 (.094) with the bases loaded this season. They loaded the bases in the first inning, but Manoah struck out Grandal to end the inning.

The Sox were outscored 21-11 in the series and have a minus-55 run differential this season.

2. The Blue Jays made the Sox work for the final out of an inning.

The Sox had a one-run lead in the fifth inning Tuesday, but the Blue Jays were threatening with runners on second and third, one out and Guerrero up. Sox starter Lucas Giolito fell behind in the count 2-0 but rallied for a strikeout.

The Blue Jays followed with clutch two-out hits. Teoscar Hernández hit a sinking liner just out of the reach of diving center fielder Adam Engel for a two-run double. Alejandro Kirk followed with a two-run homer.

Michael Kopech surrendered a bases-loaded walk with two outs in the second inning Wednesday. And in the third, he walked Chapman, giving the Blue Jays two on with two outs. Danny Jansen followed with a three-run homer.

Giolito and Kopech allowed season highs in runs with six and five, respectively. Tuesday was the first time Giolito allowed more than three runs in a start this season.

“I just let it snowball,” Giolito said, according to The Associated Press. “I put up a big crooked number. It’s just very frustrating.”

Giolito is scheduled to start Sunday’s series finale against the Tampa Bay Rays. Vince Velasquez and Dylan Cease are the projected Sox starters Friday and Saturday.

3. The schedule doesn’t get easier for the Sox.

A difficult stretch got off to a rough start for the Sox (23-26), who fell to third in the AL Central with Thursday’s loss. They are a half-game behind the second-place Cleveland Guardians (22-24).

The Sox are fortunate the first-place Minnesota Twins stumbled in Detroit, dropping four of five games. The Sox trail the Twins (30-23) by five games.

The Sox have lost five of six. And it doesn’t get easier with three games this weekend at Tropicana Field against the Rays before returning home to start a three-game series Tuesday against the Los Angeles Dodgers.