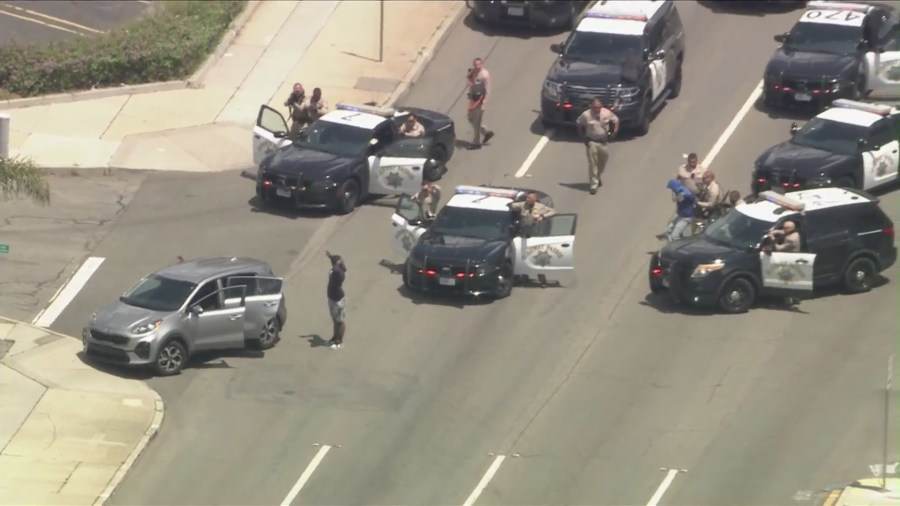 Three people were taken into custody late Wednesday morning after a driver in a stolen vehicle led authorities on a chase from Hawthorne to El Segundo.

Hawthorne police began chasing the driver after a report of a stolen vehicle. The California Highway Patrol took over the chase as the driver headed onto a freeway, CHP Officer Amber Davis told KTLA.

The silver SUV appeared to have damage on the front passenger side door.

A police helicopter was tracking the vehicle in the air, but CHP units were soon following close behind on the ground as the driver continued westbound on the 105 Freeway around 11:35 a.m.

The driver then got off on surface streets in the El Segundo area and continued into Playa del Rey.

After driving along the coast, the pursuit suspect continued into a residential area near the ocean, aerial video from Sky5 showed.

Soon, the driver ended up along World Way, near LAX.

Around 11:42 a.m. CHP officers appeared to have lost sight of the driver, but soon, the suspect was driving along Vista Del Mar.

Around 11:50 a.m. the driver stopped along Pacific Coast Highway and several CHP units surrounded the SUV.

The driver and two other people were then taken into custody.