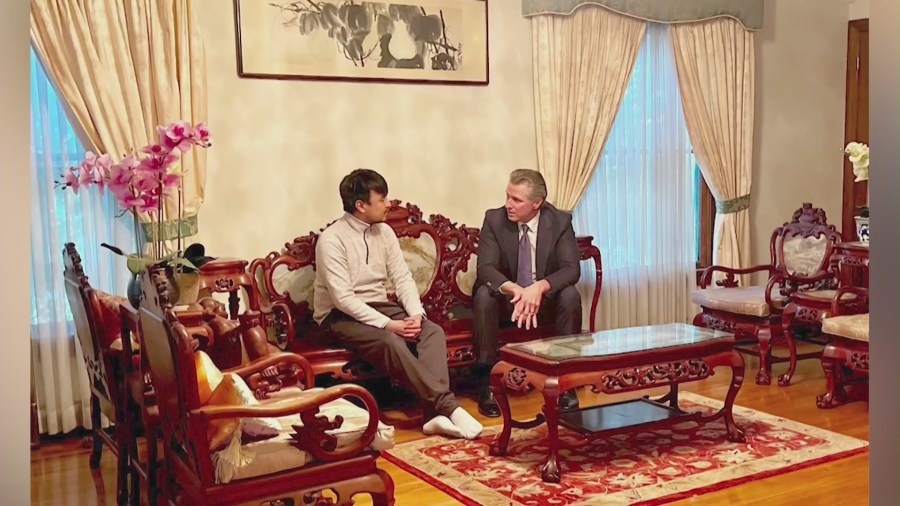 Governor Gavin Newsom on Monday visited the home of 26-year-old Brandon Tsay, who is being called a hero for disarming the Monterey Park gunman when he entered a second dance hall in Alhambra.

“This remarkable young man without any hesitation, though with moments of fear, took it upon himself to save countless lives. Who knows how many lives he saved,” Newsom said outside of Tsay’s San Marino home.

Twenty to 30 minutes after the Monterey Park shooting, authorities say Tran entered the Lai Lai Ballroom in nearby Alhambra armed with what officials described as a magazine-fed semi-automatic pistol that had an extended, large capacity magazine attached to it.

That’s where Tsay, a third-generation operator of the family-run dance hall, wrestled the gun away from the 72-year-old.

Tsay told The New York Times that he was in the office when he heard the front doors swing open and what sounded like metallic objects hitting one another.

When he turned, he said he immediately noticed “menacing eyes” and the semi-automatic pistol pointed at him.

Unaware of the earlier carnage in Monterey Park, Tsay jumped into action, struggled with the gunman and disarmed him before ordering him to leave or be killed with his own firearm.

“From his body language, his facial expression, his eyes, he was looking for people,” Tsay said.

Though the 26-year-old says he’s okay, he did admit to some issues.

“I’m having some trouble sleeping. I’ve been…you know, recalling events and what happened, contemplating the incident. I would say my mental health is recovering,” he said. “I just hope those people that were affected mostly by this incident also can recover safely.”

“I’ve always told him that if there’s any people robbing the place, just give them money. A life versus money…money is nothing, but I guess this is a different situation. I never prepared him for that,” he told KTLA.

“I’m very proud of him. He’s braver than the rest of us. To be honest, I don’t think I could have done that,” she said. “Once I saw what happened, my stomach turned I was so upset.”

Tsay also acted quickly, along with his family, to get crucial surveillance footage of Tran to authorities.