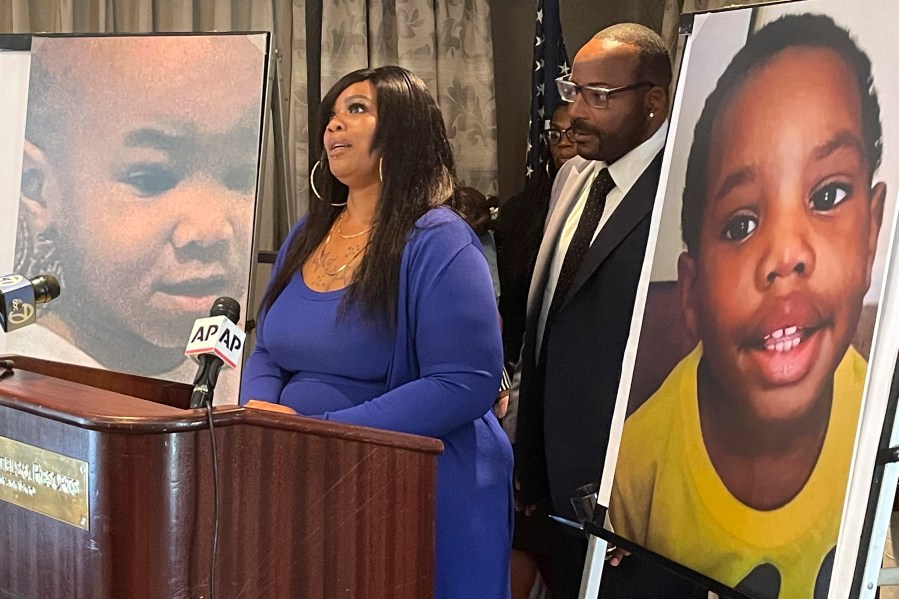 The biological mother of two small California boys who died while in the state foster care system has filed a federal lawsuit alleging her sons were unlawfully taken from her and placed with foster parents who are now charged with killing them.

Four-year-old Classic Pettus and 3-year-old Cinsere Pettus were reported missing from their foster family’s backyard in the desert town of California City on Dec. 21, 2020. The boys, who were Black, have not been found and Kern County prosecutors said in March that an investigation determined they are deceased.

The foster parents, Trezell West and Jacqueline West, have pleaded not guilty to multiple charges including two counts of second-degree murder. Their criminal trial is scheduled to begin next month.

The civil rights and wrongful-death lawsuit filed June 17 by the boys’ birth mother, Ryan Dean, and grandmother, Dana Moorer, names the Wests as defendants along with Kern County Human Services and the California Department of Social Services.

It alleges the foster home was a “state-created danger” that led to the eventual disappearance and deaths of the two boys. The lawsuit seeks $40 million in monetary damages.

“I just feel like I didn’t deserve this,” an emotional Dean said at a San Francisco press conference on Tuesday. “I’m not a criminal. I don’t have a bad record.”

Plaintiffs attorney Waukeen Q. McCoy said that Congress intended with the Family First Act of 2018 to try to preserve family units, reversing the presumption that foster care is better for children.

“Cinsere and Classic Pettus were murdered after being unlawfully taken from their mother as a result of an outdated foster care model that Congress described as having a perverse incentive to tear African American families apart,” McCoy said.

The older child was taken from his biological parents after he was hospitalized in 2016, according to the suit. Dean had returned from work to find the 3-month-old boy “crying uncontrollably” and when she brought him to the emergency room it was determined he had two broken legs, the court filing said. The biological father, Charles Pettus, said he gave his son two baths that day and nothing else happened, according to the lawsuit.

A hospital staff member informed Dean that Kern County Human Services would be taking the child because “they believed he had been abused,” the lawsuit alleges. Dean had no criminal record and no allegations of abuse against her when the child was removed from her care, according to the filing.

After Dean gave birth to another son in June 2017, a sheriff’s deputy took him away because Human Services officials said they “like to keep siblings together,” the lawsuit said.

After spending months with one foster family, the boys were placed with the Wests in late 2018. At this point, Dean said she started noticing that her children were losing weight and that the younger boy had scratches on his face, the claim states.

“In November 2018, Ms. Dean wrote a letter expressing her concerns about the lack of proper care her children were receiving while in the foster care of the Wests. No one ever provided a response to the letter,” the lawsuit states. Dean’s mother, Moorer, also filed requests to have the children placed in her care, which were ignored, the filing said.

McCoy said Moorer also completed parenting classes and a psychological review in an attempt to get her grandsons but was denied.

State and county officials negligently placed the brothers in the Wests’ care, “so as to directly and proximately cause the subsequent death of the minor children,” the lawsuit states. Officials denied the biological mother and grandmother’s requests to reunify with the children before they were killed, the filing said.

The Wests renamed the boys Orrin West and Orson West but the lawsuit refers to them by their birth names, Classic Pettus and Cinsere Pettus.

Kern County District Attorney Cynthia Zimmer announced in March that a combination of direct and circumstantial evidence was presented by investigators, and a grand jury determined that the boys had died three months before the foster family reported them missing.

The grand jury heard testimony from 50 witnesses over three months, she said.

Zimmer said that a week after the boys were reported missing “crucial information came to light” that brought in the involvement of police in Bakersfield, about 60 miles (100 kilometers) west of California City.

Police and FBI agents searched a field in Bakersfield in March 2021, but the results of that effort have not been revealed. The district attorney has said she is not permitted to reveal any facts of the case until the trial.