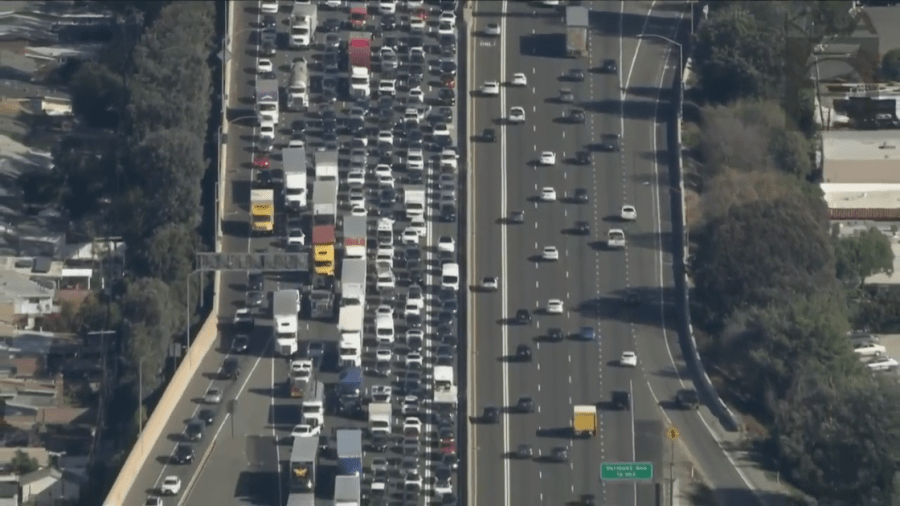 Officials with the California Highway Patrol announced the arrest of two brothers in connection with the car-to-car shooting on the 405 Freeway in Van Nuys Monday that left one man injured and backed up traffic for miles.

The suspects, 24-year-old Elijah Allen Green and his brother, 18-year-old Jaiden Allen Green, both from Lancaster, were booked Tuesday on suspicion of robbery and attempted murder.

In a news release, investigators said they learned the suspects robbed a man on city streets who then chased the brothers’ vehicle onto the 405 Freeway where the vehicles collided.

“Immediately after the crash, a passenger in the suspect vehicle discharged a firearm at the victim vehicle, striking the victim with one round,” the release stated.

The victim then drove himself to a hospital in Tarzana where he was treated for a non-life-threatening gunshot wound.

The incident prompted CHP to issue a SigAlert, closing all northbound lanes of the 405 Freeway at Victory Boulevard for several hours, while they investigated. Aerial footage from Sky5 showed an officer on the roadway with a bomb-sniffing K-9 and several evidence markers on the ground.

The closure created a traffic logjam on the northbound lanes of the 405 Freeway and impacted traffic on the 101 Freeway as well.

Witnesses to the incident, along with detectives from the Los Angeles Police Department, helped CHP identify the suspects.

On Tuesday, CHP detectives executed two search warrants in Lancaster which led to the arrest of the shooter and driver of the suspect vehicle, as well as the seizure of “multiple illegal firearms.”

Anyone with information about this incident is urged to contact CHP Investigator N. Villamizar or Public Information Officer W. Haver at 818-888-0980.